Introducing our shiny and new High-Strung Survival Guides—carefully crafted and curated to help you dive into new tasks, embark on daunting adventures, and make it out of missteps alive. We’ll give you tips on what works for us (and what doesn’t) so that you don’t have to go it alone.

Biking in the city is also really fun. I’m far from a cycling expert, but what I do know is that there should be more of us. If more people hopped on their bikes a few times a week, the city would have less traffic congestion and pollution, we’d get more exercise, and the powers that be might consider better infrastructure for us in the future. It’s also easier to empathize with people who use non-traditional forms of transportation when you have tried them out yourself. Also, did I mention it’s fun?

The following are some of the ways I equip myself to get on my Panasonic road bike every morning and cruise into the sunset. Ok it’s like 8:30 am when I leave the house but you get it. If you already ride your bike every day, especially in one of those nifty spandex getups, this probably isn’t new information. If your ride has been gathering dust in the basement for the last two years or you don’t own a bike but you’ve stepped in one too many mystery puddles at the train stop and are considering other options, read on, my friend, read on.

I’ve been living in the city since 2015. Some days I think I own this town, but most days I have to tap open that little green app while hissing “How the fuck would I know which way is east?” I know some people prefer to learn their way around organically without the aid of technology, but Google Maps is my savior. It’s incredibly useful since the algorithm attempts to lead you down less heavily trafficked roads with bike lanes. It’s also a nice motivator when you are heading out and see that the train will take 37 minutes but biking will take 11. Take control of your destiny, grasshopper!

The Bike Lane, a Fair-weather Friend

One important lesson imparted on us by George Orwell’s “Animal Farm” applies here: all bike lanes are equal, but some are more equal than others. Some areas have lovely two-way protected bike lanes that place a barrier of some kind between automobile traffic and cyclists. These are usually painted green. Enjoy them and tell your local representatives that you want more! The majority are not so luxurious, however. Often bike lanes puts cyclists between two persistently dangerous objects – moving and parked cars.

Pro tip: get used to it and stay alert. Don’t expect anyone to follow the rules (this is good advice for life in general) and don’t think that just because you’re biking within two lines on the street that you are any less susceptible to the elements. For instance, cars in motion tend to look out for cyclists whereas someone in a parked car may not think twice before opening the door into a bike lane. Think of the bike lane as your frenemy; it’s better than not having one at all but you still have to watch your back.

Wear a helmet, but don’t be a brat about it

I always wear a helmet. Does this mean I’m a nerd? Is it the right thing to do? Should you wear one? Great questions, all around. A bit of backstory, if I may: I wear a helmet because before I moved to the city I suffered two separate falls off my bike within a few months of each other, one resulting in a frightening concussion. So, I sacrifice hair volume for my own peace of mind. However—and this is a big however, I do not advocate the all-too-common notion of shaming cyclists for choosing to not wear helmets.

Because forcing cyclists to choose between wearing a helmet or facing public disapprobation means fewer people will ride their bikes. In addition, it contributes to the idea that biking is an inherently unsafe practice, which it is not. What can make it unsafe is poor urban planning, lack of infrastructure such as consistent and well-designed bike lanes, and uneven education for drivers, pedestrians, and cyclists alike on how to share the city. We tend to give greater support to drivers and walkers because they are in the majority.

Given the statistics on traffic deaths each year, pedestrians, runners, and drivers would also benefit from wearing helmets, but we don’t require this of them, which is an important indicator of the way we perceive biking. There is also evidence to show that drivers react more aggressively to cyclists wearing helmets than to those without.

All of that being said, I personally would recommend getting used to wearing a helmet if you’re a bit nervous on the road. They come in all kinds of cute colors and styles and of course, protect your noggin. Wearing one makes me a more confident rider, which is a big part of what keeps me safe.

I forced my partner to take this picture after we biked over the Manhattan Bridge for the first time. I’m great.

Riding to work in the morning gives you a chance to see the city yawn and blink its eyes open. I personally do so while listening to a podcast, considering I am pretty much useless if I’m alone in public and not listening to something. As with wearing a helmet, this is a topic of some debate, and I want to stress that this is not a suggestion but just another motivator for me that might work for you if you need one. In New York, cyclists are allowed to ride while listening to a single earphone, a rule I follow. Consider driving a car while listening to the radio or running while listening to music. Since podcasts are just people talking at normal levels, I feel comfortable that I can pay attention to my surroundings and hear any honks or brakes that I need to (as well as catcalls that I don’t, sigh).

If you do choose to listen to an episode of “2 Dope Queens” or “Modern Love” on your ride, be prepared: people may look at you strangely when you burst into tears or laughter while in the saddle. It comes with the territory. Embrace it. If you’re single, consider how mysterious and intriguing you look to potential mates with smudged mascara and a single tear atop your cruiser. Work it.

You will sweat. It’s fine.

One of the greatest parts of riding around New York City is that it is SO. FLAT. Of course, there are the occasional slopes and riding over any bridges will take a good bit of exertion, but compared to a lot of other places it is smooth sailing. Regardless, you will sweat. You’re exercising! Some people might take this as a reason not to bike to work in the morning or to a place where they have to look nice.

While I’m lucky enough to have a lax dress code at my job and showing up a bit damp under the pits isn’t a serious situation, there are plenty of solutions for what to wear during and how to remain presentable after a ride. Companies like BetaBrand have entire “Bike to Work” lines and there are lots of fun tutorials for how to keep your helmet from crushing your bangs to death. To be fair, I haven’t invested in clothing specifically for biking or been able to save my bangs from smooshing but if those are your priorities you have lots of options.

I have had not one but two bikes snatched out from under me within the first year of living in the Big Dirty Apple. This made me feel like a dumb yokel who can’t lock her bike up. Which, I guess, I kind of was. The first bike I bought on Craigslist when I moved to the city came with an old chain lock that I was all too eager to use without realizing how dingy it was, making it easy for some teens (probably) to grab when I left it locked out front of my apartment overnight (see also: I’m lazy) The second time around I learned: DON’T LOCK TO THIS, DUMMY! 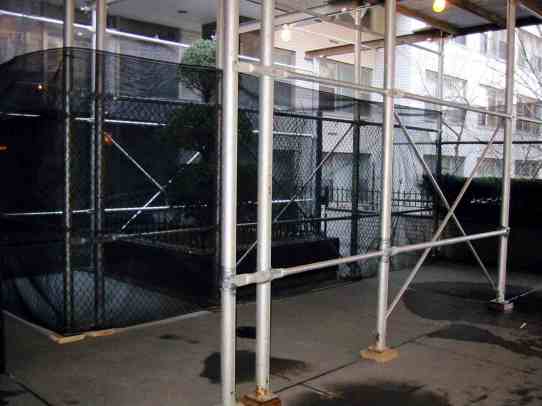 No matter how expensive your new lock is, if you use it on a piece of scaffolding that an ambitious thief can easily unscrew and slide off, it doesn’t really matter. That said, you should invest in a good lock provided you actually use it appropriately. The best locks are pretty heavy—my current choice is the aptly named Fahgettaboudit from Kryptonite—so I’ve got a cute little rack on the back of my current bike for storing it: 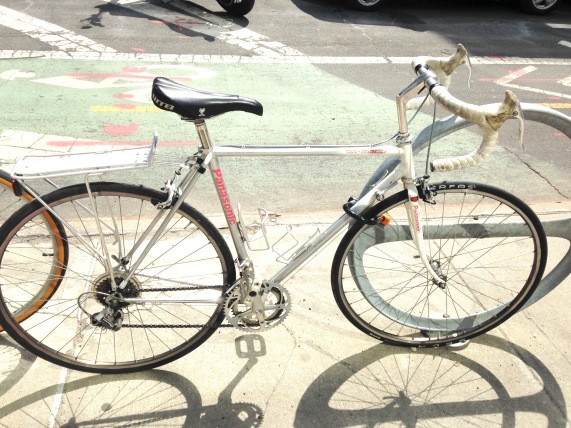 I mean, look at this beauty. The third time’s the charm. Doesn’t it call to you?

Habits are difficult to break. There’s always a reason not to ride your bike – it’s too hot, it’s too windy, it’s too far. You’re tired, you don’t want to carry your bike down the stairs, you have nowhere to lock it. I promise that you will find a routine that works for you and it will be good. Like, really good.

If nothing else, you can high-five other cyclists during your commute. Regardless of your ideas about biking, give it a try. It doesn’t have to be a complete lifestyle change or cultural shift, just remember that you have a right to alternative modes of getting around. Find what works for you – you may be surprised what you learn about yourself and your home.

For more bike-related news and helpful information that isn’t based solely on Frida’s Personal Experiences™, check out some of these organizations: